Happy 93rd Birthday Tun – Many happy returns to build a new political legacy of democracy, justice and unity as well as Malaysia as an international top class nation which is a “beacon of light in a disturbed and distracted world”

Today is the 93rd birthday of the Prime Minister, Tun Dr. Mahathir Mohamad.

Let me take this opportunity to publicly wish “Tun, Happy 93rd Birthday – Many Happy Returns to build a new political legacy of democracy, justice and unity as well as Malaysia as an international top class nation which is. ‘beacon of light in a disturbed and distracted world’”.

Many have kept asking how I could co-operate with Tun Mahathir when in the past, for the best part of my 53 years in politics, we had been at loggerheads – for instance, with me in the Opposition while Mahathir was the fourth Prime Minister for 22 years from 1981 to 2003. I was even detained for 18 months with Guan Eng under the Internal Security Act during Operation Lalang from October 1987 to April 1989.

Malaysia was placed in unparalleled peril under the sixth Prime Minister, Datuk Seri Najib Razak, with Malaysians ashamed to admit that they are Malaysians in the international arena because of the infamy, ignominy and iniquity of becoming a global kleptocracy as a result of Najib’s international 1MDB money-laundering scandal, hurtling in the trajectory towards a failed, rogue, kakistocratic and kleptocratic state.

Could Malaysia be saved from Najib in the 14th General Election?

Nobody could be sure but a supreme effort had to be mounted, for we believe that Malaysians who want a clean, just, free, democratic and united Malaysia are more patriotic than Malaysians who are prepared to see Malaysia go down the drain to become a failed, rogue, kakistocratic and kleptocratic state.

Hence the formation of Pakatan Harapan, with Tun Mahathir Mohamad as the Prime Minister-designate with the pledge as contained in the Pakatan Harapan 14GE Manifesto to save and build a New Malaysia.

On 14GE Polling Day on May 9, Malaysians did what was thought the impossible, and the whole world noticed that in an era when democray worldwide is in decline, Malaysians have returned to the world stage to provide hope and leadership to reclaim democracy as the best form of government for the ordinary people as compared to the elites.

In the process, all political leaders and even Malaysians have a lot to learn from both the successes and mistakes of nation-building in the past six decades – whether Mahathir, Anwar Ibrahim or even myself as we have to be more sensitive and sensible with regard to the legitimate aspirations of all Malaysians. 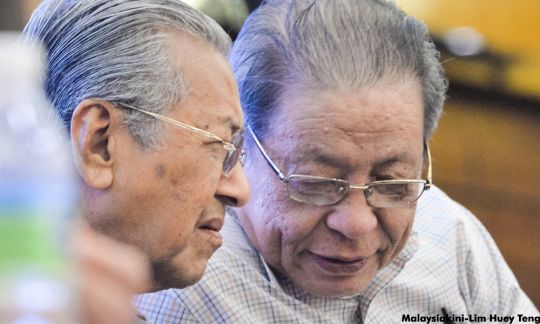 Did the 95% of the Chinese voted for a Chinese Malaysia when they voted for Pakatan Harapan so they could bully or dominate other races in the country?

Of course not. They voted for a Malaysia where all Malaysians, whether Malays, Chinese, Indians, Kadazans, Ibans or Orang Aslis, could have a better quality of life, human dignity, freedom, democracy and good governance where there is no corruption and abuses of power and a Malaysia which is admired and respected by the world.

There are Malaysians who sing the Negaraku but want Malaysians to be more polarised according to race and religion. These are the people who suffer a major defeat in the 14GE.

We want Malaysians who not only sing Negaraku but live in the spirit of the National Anthem to ensure “Rakyat hidup Bersama dan Maju”.

We must reject irresponsible political opportunists who thrive only on racial hatred and distrust – inciting the Malays to hate the Chinese or urging the Chinese to distrust the Malays, completely forgetting the National Anthem that “Negaraku, Tanah tumpahnya darahku, Rakyat hidup Bersama dan maju”.

Corruption, abuse of power and the 1MDB scandal were major issues in the 14GE.

I do not believe that the 35-40% of Malays who voted for Barisan Nasional and the 30-33% who supported PAS in the 14GE wanted to vote for kleptocracy, abuses and excesses of power as well as the various forms of injustices and oppression under Najib’s premiership.

If the general election is now held after the truth about t1MDB scandal and other mini-1MDB-like corruption in MARA, FELDA and other public bodies have become widely known, the majority of Malay voters would have supported Pakatan Harapan to fight kleptocracy and to ensure that Malaysia stands for clean and honest government and not a corrupt and decadent government – and UMNO/BN would not have secured 35-40% of the Malay votes or PAS won 30-33% of the Malay votes.

Today is the 60th day of the new Pakatan Harapan government in Putrajaya. There is no honeymoon for the Pakaran Harapan Ministers and Deputy Ministers for they must work from the very beginning to fulfil the promises of a New Malaysia, as Pakatan Harapan does not intend to be a one-term government in Putrajaya, but to be able to continue the work to build a New Malaysia in the 15th and 16th General Elections.